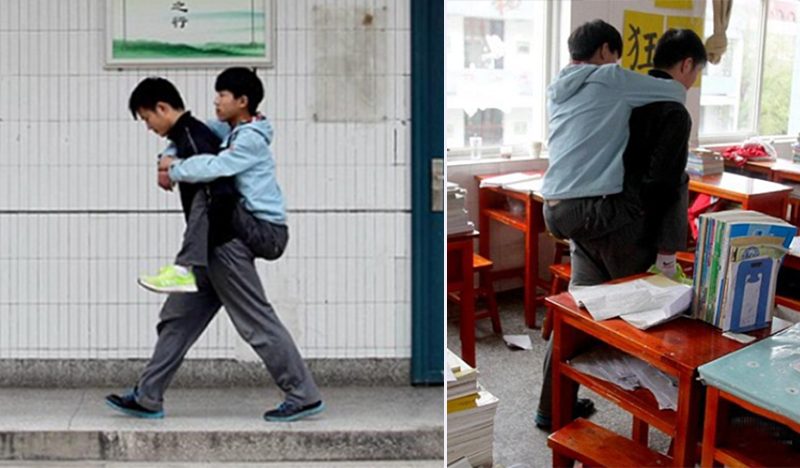 Most of us have had days when we felt like the bed was hugging us so tightly, days when it was so hard to get off the bed to go to school. Well, this kindhearted student named Xie Xugang not only battled with this, he got himself ready for school but he also took care of a friend of his Zhang Chi, he has been helping his friend every morning for the past three years!

Xuzhou, Jiangsu are good friends, both go to the same boarding school. The plight of Zhang chi started three years ago, muscle atrophy now limits his mobility to walk around on his own.

The current predicament he is now in because of muscle atrophy now puts the completion of his studies in jeopardy.

Fortunately, Xie a good friend and classmate of Zhang took the initial step to help his friend.

For the past three years, Xie has been helping his friend to get dressed for school, wash his face and buy food. Xie has also been carrying his friend to school, carrying the 45 kilograms (99 pounds) Zhang on his back in the school. Xie who weighs 75 kilograms (165 pounds) carries Zhang to school, across the campus grounds and up to their classroom which is on the third floor.

Initially, Xie’s family was against the idea of Xie having to care for and carry Zhang around. They were worried that this might negatively impact the studies of Xie. But Xie proved that helping wasn’t a hindrance and Zhang prove that his disability won’t hamper his studies as the two good friends have remained in the top three for the past three years.

Xie has decided to participate in the high-tech single-skill interview offered by the Nanjing Institute of Chemical Technology while Zhang has opted to take the college entrance examination.