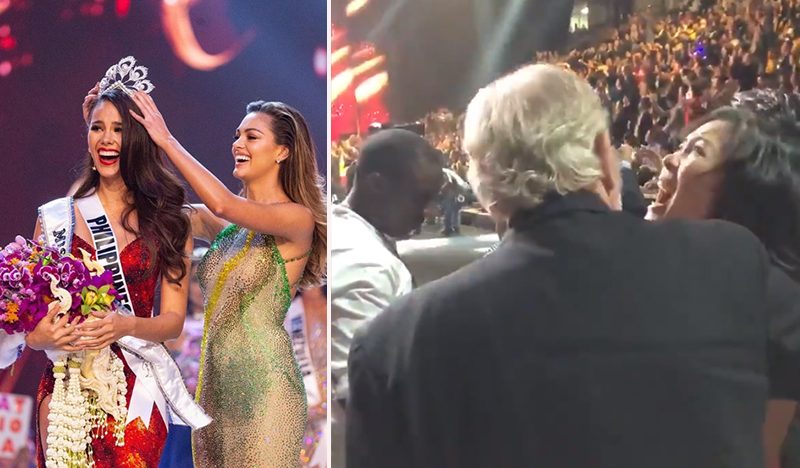 It’s natural for any of us to be nervous to one of our bets in beauty pageants. It’s even more nerve-wracking and exciting at the same time for Catriona Gray’s parents hoping for their unica hija to clinch the coveted title. Alas! When Steve Harvey revealed that their daughter is the Miss Universe 2018, they spontaneously expressed their emotions. The said moment happened during the coronation night of Miss Universe at Impact Theater in Bangkok, Thailand.

One of the spectators nearby Cat’s parents captured the precious moment and uploaded the video on Twitter. Under the handle of @MikeinCambodia said, “I sat next to Catriona Gray’s parents, and this was their reaction when their daughter, Miss Philippines, won Miss Universe,”

The video showcased a proud father cheering for his daughter in a standing ovation while her mother burst to tears of joy when she knew her daughter did it.

I sat next to Catriona Gray’s parents, and this was their reaction when their daughter, Miss Philippines, won Miss Universe. pic.twitter.com/1Wu9ysdhEA

In a press conference after the pageant, Catriona unveiled her daring dress in red blazing in glory. She proudly said it was inspired by Mount Mayon and especially pointed out her mother’s dream way back when she’s 13.

Catriona extended the story by telling that her mother, Normita, dreamt about her shining in a red dress and competing in Miss Universe. Indeed, when she approached her mother, her mother broke down and said ‘I dreamt this.’ while in tears.

Catriona always brings her father’s advice whenever she is and whatever she has gone through. She quoted, “I can always hear my dad’s voice, whenever he gives me advice it’s always stuck in my head. He always tells me ‘the longest journey starts with a single step’ and it sounds very simple, but sometimes when we’re reaching for a dream or we have an ambition, it seems so far away and we can feel overwhelmed but when we look at it as one small step at a time, one day you’ll look up from your feet that you’re already there,”

Moreover, she garnished her introduction video in Miss Universe with this heartfelt message.

Miss Universe 2017 Demi-Leigh Nel-Peters finally enthrones her by putting the crown in her head and securing the fourth Miss Universe title for the Philippines. Together with Pia Wurtzbach (2015), Margarita Moran (1973) and Gloria Diaz (1969), the four queens will continue to reign in and be an epitome of the Philippines as a pageant powerhouse.