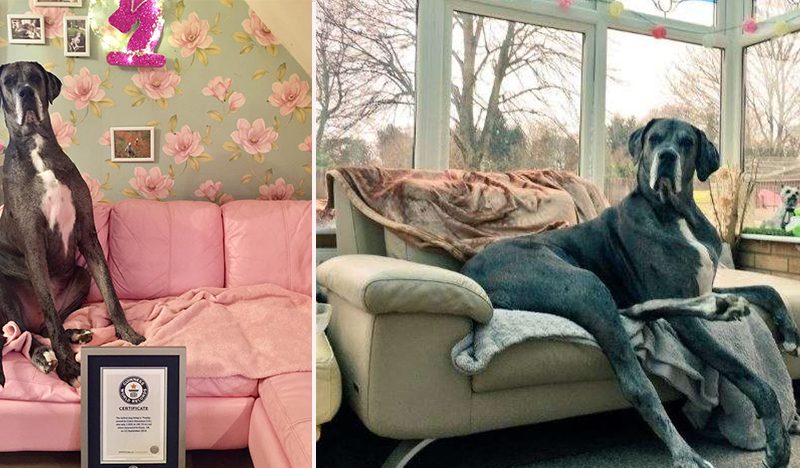 Having Great Danes in your homes already needs a lot of preparation. Claire Stoneman, owner of Freddy the Great Dane, didn’t expect that she’d have to do way more than the normal preparations as Freddy lives on and grow to be 7ft 4” tall. Great Danes are ranked highly for how large they can get, but Claire never expected that Freddy would grow as tall as this. 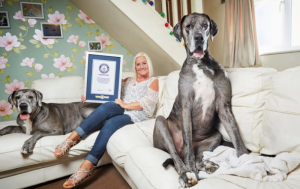 Freddy has been officially recognized by the Guinness World Records as the world’s biggest dog, standing taller than his owner and is currently at 200 pounds in weight, this 18-month-old dog is set to grow even larger as it hasn’t reached peak maturity. 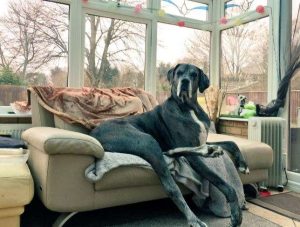 As the saying goes, “Sic Parvis Magna”, or big things from small beginnings, Claire remembers how Freddy and his sister Fleur started out as small little pups like every other dog, with Fleur having the same build just like her larger brother except slightly smaller. 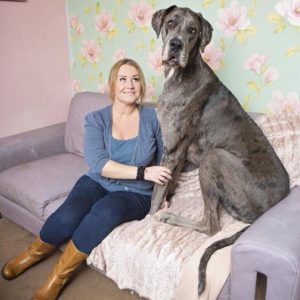 Claire recalls how Freddy used to struggle to eat back when he was just a small pup. She even added that she has tried everything just so Freddy could eat healthily, but he just can’t. As he grew older, Freddy eventually ate more and more until Claire started spoiling him. 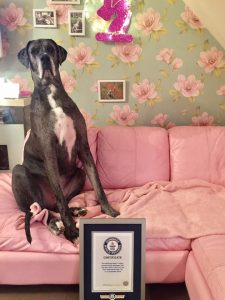 Due to their large builds, Claire explains that living with the two dogs is like living with two ponies, two ponies that love to eat that is. Their diet consists of chicken (roasted and deboned so it’d be safe for consumption), peanut butter and pate on toast, minced chicken, tripe, sausages, and coffee (with milk and two sugars). Their diet is almost like a full brunch. Other than their huge appetite, they need huge beds, more specifically, couches, so that they may rest their long and large bodies, unlike most dogs that even in maturity still proceeds to sleep in baskets. 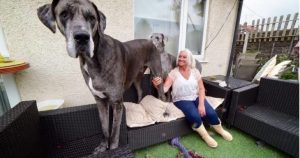 Due to their dog nature still at work, Claire’s 14 previous couches have been chewed out by the two dogs. Other than chewing up couches, the two apparently also ate a table and some chairs, has also chewed on walls, all of which had to be replaced and repaired, with the wall being re-plastered. Wanting to get out of the house, the dogs used to pull up floorboards from the kitchen and the sitting room, having eaten numerous and countless pairs of shoes and even managed to break the back door.

Luckily for Claire, however, the dogs have now gotten mature and are now behaving properly. Unlike before when they used to chew on everything, and as a return, Claire gives them a 40-minute walk daily to keep them happy. She often walks her dogs early in the morning as to not startle other dogs.

Claire knows that if Freddy wanted to go after something, may it be another dog or a squirrel perhaps, she wouldn’t be able to stop him and it’d be disastrous. Despite all this, Claire is very happy with her two large children and is more than alright with spending money to keep them healthy at all times.