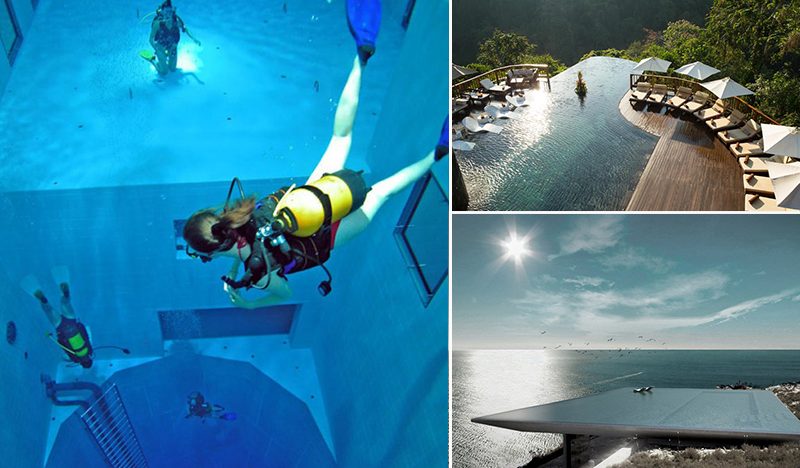 Adrenaline junkies, adventurers and pleasure seekers here are some of the greatest pools in the planet. From the deepest pool to a pool at the top of a skyscraper, from the tropical forests of Asia to the stunning Greek islands of the Mediterranean, from the sinkhole’s of Utah to the cenotes of Mexico you name we’ve got it. Without further equivocation we give you the top 10: 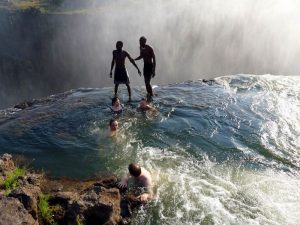 Devil’s Pool Victoria Falls is the world’s ultimate infinity pool. Swimming on the edge of one of the earth’s largest waterfalls was one of the most thrilling, insane, and awesome experiences we’ve ever embarked on during our Oasis Overland trip across Africa, and perhaps all of our travels around the world. Devil’s Pool is a death-defying feat that even the most casual of thrill seekers must add to their bucket list. You can actually swim and even lean over the edge of Africa’s famed Victoria Falls. The experience in Devil’s Pool is every bit as mind-boggling as it looks. You can literally get right up to the edge of what amounts more than a 100-meter drop. It’s insane! 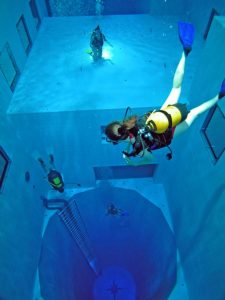 Nemo 33 is an indoor non-chlorinated fresh water facility in Brussels, Belgium. It held the record as the deepest indoor swimming pool in the world between its opening on May 1, 2004, and the completion of Y-40 in Montegrotto Terme, Padua, Italy on June 5, 2014. The pool’s maximum depth is 34.5 meters (113 ft). It contains 2,500,000 liters (550,000 imp gal; 660,000 US gal) of non-chlorinated, highly filtered spring water, maintained at 30 °C (86 °F) by a solar heater, and holds several simulated underwater caves at the 10 meters (33 ft) depth level. Due to the warm temperature in the pool, divers can dive for extended periods without a dry suit. The complex was designed by Belgian diving expert John Beernaerts as a multi-purpose diving instruction, recreational, and film production facility in 2004. Popular Mechanics rates Nemo 33 as one of the top 18 strangest pools in the world.

Swim on top of the world.
Imagine yourself floating in the world’s largest rooftop Infinity Pool, gazing down on the glittering city-skyline from 57 levels above. You won’t find a more spectacular photo-taking spot anywhere in Singapore!
After your swim, stretch out to sunbathe on a luxurious poolside lounger, or relax in the shade of a palm tree. Sip on Champagne as you experience the unforgettable beauty of a sunset amidst the clouds. 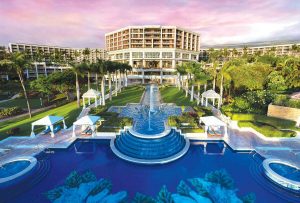 The Grand Wailea is nothing if not ambitious: As if its pools and grounds weren’t outstanding enough, the lavish resort also boasts the world’s first water elevator: an enclosed cylinder, open at the top, that takes roughly ten people to the peak of the terraced pools in five minutes. Set in a volcano and surrounded by lava rocks, this is some of the most fun you can legally have in Hawaii. 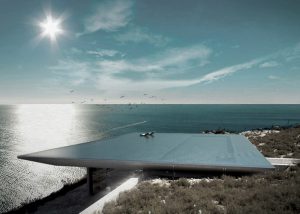 Mirage, Tinos Island, Greece. Located in the northern side of the Cyclades, Tinos is the third largest island of the island formation. Known as the Island of Madonna, Tinos is the greatest center of pilgrimage in Greece. Within its landscape of rugged, rocky hills lay more than 40 villages, like marble fragments of an ancient statue scattered across the hills. The island is famous for its unspoiled architecture, its picturesque villages and beautiful scenery. More than a thousand churches can be found on slopes and hilltops, a thousand or so dovecotes, while masterpieces of local architecture and tens of derelict windmills are found in its gullies and valleys. The scenery is lined by hundreds of kilometers of dry stonewalls that make the landscape unique. The residence is situated on a steep sloped rocky plot facing south, overlooking the Aegean Sea. The site offers protection from the prevailing winds and a natural plateau which from the beginning was identified as the optimal location for the residence as it would minimize the impact to the landscape due to excavation. It is a single-level structure and has a surface of 198 square meters. The location allows benefiting from wonderful and panoramic views of the landscape and sea. The approach to the program was Doric. Only the essential features and programmatic elements to sustain a comfortable stay were incorporated into the design.

One of the unique activities at our Midway Utah Resort is our one-of-a-kind Homestead Crater. The Crater is a geothermal spring, hidden within a 55-foot tall, beehive-shaped limestone rock located on the Homestead property.
Over 10,000 years in the making, The Crater formed when melting snow on the Wasatch Mountains seeped deep within the earth. Two miles below the surface, the earth’s interior heated the water. As it percolated upward, it picked up minerals, which were then deposited on the surface — eventually forming the volcano-shaped limestone deposit called The Homestead Crater.
The hole at the top of the dome lets in sunlight and fresh air while the interior stays heated by the mineral water at a constant range of 90 – 96 degrees Fahrenheit. 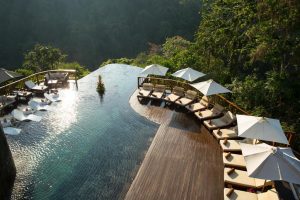 Set within a verdant tropical rainforest, the resort offers a perfect backdrop for a romantic getaway. In the evenings, enjoy a decadent dinner by the surreally beautiful pool or – for more privacy – on a Balinese mini-boat in your villa’s own infinity pool. Not to be missed is the hotel’s luxurious spa, with its extensive menu of therapeutic treatments. 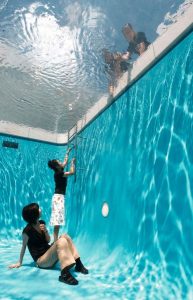 Swimming Pool by Leandro Erlich is an art installation with a permanent home at the 21st Century Museum of Art of Kanazawa, Japan. It has also had temporary installations at MoMAPS1 and the Venice Biennale.
Conceived in 1999, Swimming Pool allows visitors to look down into a seemingly full pool of water with fully clothed visitors walking around the bottom of the pool. From below, the blurry vision of looking up when underwater is recreated using a thin piece of glass with water running over the top of it.
Complete with a climbing ladder, swimming pool is a fun and interactive installation that creates the illusion of being underwater whilst remaining completely dry. 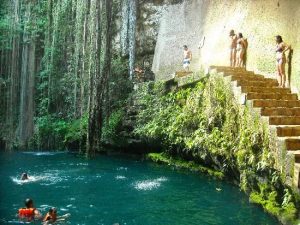 It’s dark. The water – crisp, clear, and refreshingly chilly. Bats flitter about above; tiny fish do the same below. The celebrated shores of Cancun, Riviera Maya, and Cancun satiate the masses nearby, but you’re happy right where you are, swimming in a cave… a cenote… with bats. Natural swimming pools like these dot the landscape along the Caribbean coast of Mexico’s Yucatan Peninsula where more than 6,000 cenotes can be found. Often hidden by the tropical forest and mangroves that surround them, cenotes were formed when pockets of limestone rock collapsed eons ago, the holes filling with fresh, unbelievably clear groundwater filtered up through the limestone from the water table below.
Much more than simple swimming holes, cenotes have long been revered in Mexico. Ancient Mayans made a point of settling near cenotes, and not just for the mineral-rich fresh water.
Mayans considered cenotes sacred communication portals to the gods or gateways to the afterlife. At the Sacred Cenote in Chichén Itzá,
evidence of human sacrifice has been found.
The main mysticism surrounding Mexico’s cenotes today, though, lies in their seclusion, surreal tropical surroundings, and amazing water. 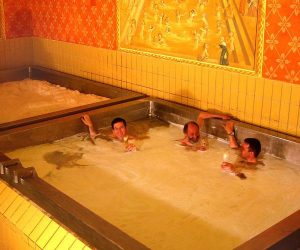 For beer lovers, this is one of only a few places in the world where they can truly, literally, immerse themselves in beer. At the Austrian brewer Starkenberger’s Castle, they offer a complete beer-centered experience with beer trivia, beer history, and of course, beer drinking.
However, the most unique elements of the castle are the “world’s only beer-swimming-pools” — seven 13-foot pools of warm beer (with some water), each containing some 42,000 pints where one can sit and bathe and relax fully immersed in beer. The beer is rich in vitamins and calcium, and it is said that sitting in it is good for the skin and helps cure open wounds and psoriasis.
The pools started back in 2005 when the old fermentation cellar of the 700-year-old castle became obsolete, so they turned the area into a beer spa. The beer is kept quite hot, although you can order a cold beer from the pool. Drinking from the pool is ill-advised.