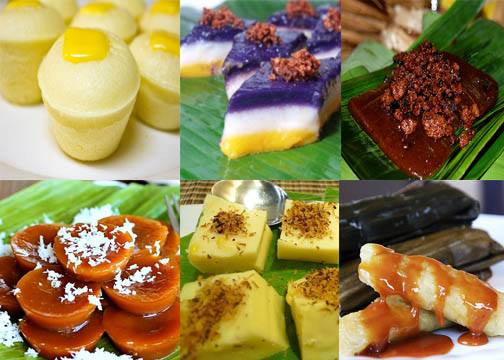 It is undeniable that Filipinos have a sweet tooth made evident by our desserts, and there are few desserts as Pinoy as the traditional kakanin. 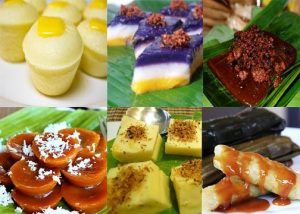 Any homegrown Filipino will tell you that creepy, ginger-haired clowns or bug-eyed jolly bees have nothing on their favorite kakanin sold by their neighborhood suki. After a long day at the office, a slice of biko or a few pieces of palitaw are what most of us normally crave for. We can’t help it; it’s practically in our blood. So what exactly is the so-called “kakanin”, well the name kakanin is derived from two Tagalog words: “kain” (to eat) and “kanin” (rice). 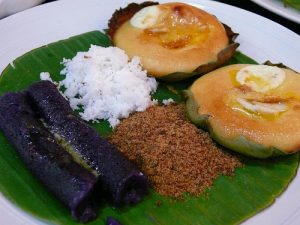 It’s an umbrella term for sweets made of glutinous rice and coconut milk, two ingredients that tropical countries like ours have in abundance. These ingredients are usually employed in one of two forms. Some recipes use galapong, made by soaking rice flour overnight, then grinding and straining it using a cheesecloth. Other types of kakanin use simple malagkit or sticky rice grains that are either ground up or left whole. Sweetened with sugar, wrapped in banana leaves and traditionally steamed in a special clay stove called a bibingkahan, sticky cakes were initially created to serve as offerings to pre-colonial gods and/or as gifts to honored guests and visitors. 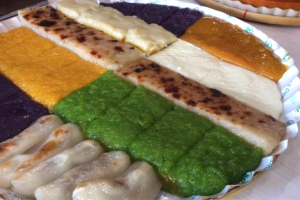 While the aforementioned clay stove is now a rare sight, many of the old recipes and cooking methods for making kakanin are still actively used in modern times. Almost all kinds of kakanin have its own unique and quirky name. As you’ll see in the following examples, each carries with it a history that’s as rich and deeply-rooted in our culture as the delicacy it identifies.

And here’s a list of a few of the mouthwatering desserts that we like to call kakanin: 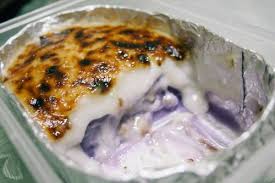 Hailing from Taguig and Pateros this delicacy may have an unappetizing name, named for its gooey, “brain-like” consistency, but let’s not set prejudice. Made of purple yam or ube sandwiched between layers of bibingka or rice cakes, inutak is best partnered with at least two scoops of vanilla ice cream. It comes in other flavors too, like quezo de bola, corn, and chocolate. If you want a slice or two of this, then head to Kristina’s Premium Inutak at The Fort, where servings can be purchased from P120 to P400 depending on the flavor and portion size. 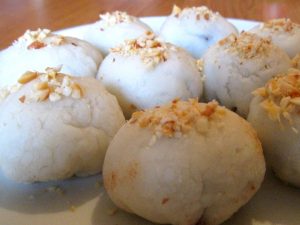 When in Rome do what the Romans do, When in Pampanga do what the locals do, when in Pampanga, make sure to try mochi. Foodies from neighboring provinces travel all the way to Pampanga’s famous Nathaniel’s Restaurant to try the mochi, —a mixture of sticky rice, sugar, water, and oil filled with sweet beans and topped with a special coconut milk sauce, based on a recipe by the restaurant owner’s mother. A small bilao of mochi costs P165. 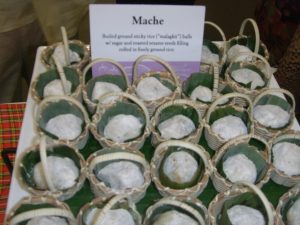 Laguna is famous for its coconut and has an abundance with delicacies featuring, well, coconuts, but few people are familiar with mache, a small, buko pandan-flavored ball made of sugar, flour and sesame seeds. Mache can be purchased for just P3 per piece from a just a handful of street vendors in the province. 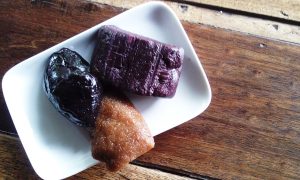 Normally wrapped in banana leaves and colorful cellophane dodol is a traditional delicacy of Filipino Muslims, dodol is made of durian cooked in coconut milk and mixed with brown sugar. Dodol serves as a symbol of royalty among Muslims