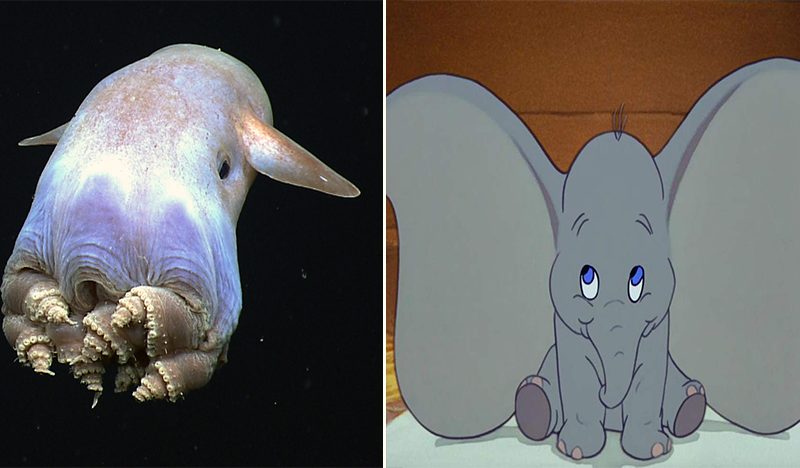 The crew onboard the N/V Nautilus was surprised by an unexpected find while on a surveying trip of an unexplored area of Davidson Seamount, an inactive volcano, the rocky habitat with large coral forests and sponge fields host a great number of unidentified species. 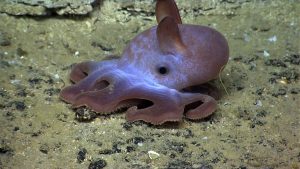 The survey Remotely Operated Vehicle used by the crew of the Nautilus caught on film the rare Grimpoteuthis, a genus of octopus with the nickname “Dumbo” Octopus, the moniker was inspired by Dumbo the 1941 American animated film produced by Walt Disney Productions as the big lateral fins of the octopus resemble the big ears of the titular character of the movie. 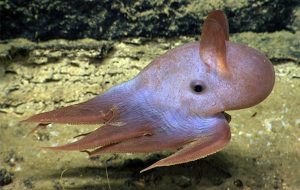 The octopus was spotted inside a protected area, namely the Monterey Bay National Marine Sanctuary, California. The Grimpoteuthis have prominent ear-like fins which extend from the mantle above each eye. 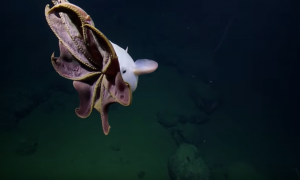 There are 13 species recognized in the genus. Prey include crustaceans, bivalves, worms, and copepods. The average lifespan of various Grimpoteuthis species is 3 to 5 years. The largest dumbo octopus ever recorded was 1.8 meters (5.9 ft) in length and weighed 5.9 kilograms (13 lb). The average size for most species is 20–30 centimeters (7.9–12 in) in length. 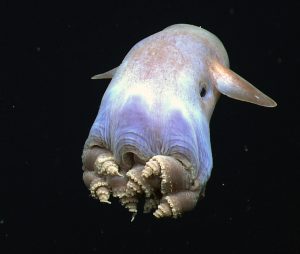 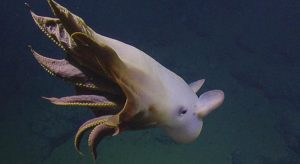 The average weight is still undetermined. The Grimpoteuthis uses its lateral fins to move by flapping them, while it steers with its webbed arms.

Aside from this, very little is actually known about the behavior of the octopus as its rarely been observed, which makes this siting a welcome treat for the scientific community.